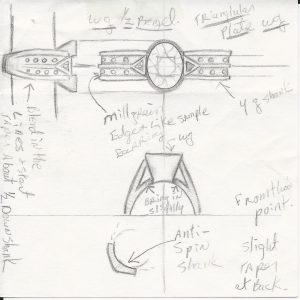 I should start with how the name for this blog came to be decided on.

I am an eclectic individual having a love for many wildly different interests. My main interest in life is my wife, after that, jewelry.

You get the picture.

I look at a piece of jewelry and think it is beautiful Then I want to know its history. How was it made? What are the design elements and why were they put together in that way? You might say that I deconstruct it in my mind.

This is how I define the word “Deconstruction”.

Deconstruction is a process to understand how something was created. Mostly used in writing, it is also used in art.It is looking at the “components” to see how they make the “whole”, whether that is a piece of writing, a building, a favorite chair, a ring…
Deconstruction looks at the smaller parts that were used to create an object. This gives insight into the mind of the person who created it. In some ways, it lets their thoughts and ideas continue to live centuries after they have passed. The smaller parts are usually ideas.

And those “smaller parts” can be used to make something new. Maybe with a similar look, but more often than not, something new. Every part of a piece of jewelry can be a unique design element.

All of the items in the list above are different, but the same. All of them have smaller pieces that can be combined in countless ways to make something that is new. Each type of toy is like the components of a piece of jewelry. They make variations on a theme. But consider using pieces from different sets of toys to make something new. Can Lincoln Logs be used with Tinker Toys? Drill some holes in the Lincoln Logs to fit the dowels of the Tinker Toys and you will have exponentially increased the possible items you can make. And with designs no one has ever seen before.

This is what I mean about “Jewelry Deconstructed”. It is the study of jewelry and all of its variations.

Many times when a client walks into a jewelry store, they know they want a piece of jewelry. The desire and passion is there. They have a strong feeling of wanting…

They wish for something good to happen. But how do they get started?

They may have a concept or idea but it is unclear, vague, or ill-defined.

So if they are lucky, they will find someone who can help them take that vague concept and bring it into a clear and defined idea. Many times this process is lengthy as each part of the idea becomes distinct, it must be compared to the parts previously determined. concepts of the small parts intermingle and combine like the spices in a pot of curry. Each part separate but when combined in different amounts and ways, they make something wonderful.

So it is with jewelry. A handful of simple design elements can be combined endlessly. Always making something new.

Look at the picture above. Compare the six drawings. Many similar elements. But then each one has a personality of it’s own. Which one is your favorite? Which one appeals to your eye?All due to a slight re-imagining of the small design elements that are added to each ring.

It is also this process of “Jewelry Deconstruction” that allows us to look at older pieces of jewelry and reuse and update the small details to make them relevant to modern design sensibilities.

Many years ago I took a class and the instructor asked everyone to make a jewelry piece that could be worn such as a broach. But the pin on the back had to in some way covered when worn to keep it from being accidentally catching on fabric or even a persons skin. He had shown some ways of doing this, But I decided to do a sliding clasp that copied a common style at the turn of the century.. The 19th century…
He thought I had been very creative in making the pin clasp, But when I told him where I had gotten the idea from, He laughed and loved that I incorporated design elements from the past into a modern jewelry item and still kept to the requirements of the assignment.

So this first post did wander a bit, But I think I got my point across. Jewelry, deconstructed, is not the end of a piece of jewelry, but the beginning of something new.

Look at the following words. All are synonyms for ‘deconstruction’. All of them can readily be used in a discussion of jewelry. In many different ways.

So I am concluding this first post with a question for you.
“How would you deconstruct a piece of jewelry?”

This site uses Akismet to reduce spam. Learn how your comment data is processed.